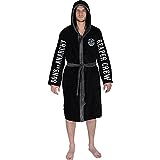 FX’s highest rated series ever Sons of Anarchy. An American drama series created by Kurt Sutter. The show is about a close-knit outlaw motorcycle club operating in Charming. The MC’s clubhouse is at Teller-Morrow Auto Shop. Teller the last name of one of the founder of the MC is know widely throughout the town of Charming. Jax Teller the president of the club (SAMCRO) who is described as “a rebel who never lives by society’s rules”. Now have you ever wanted to be part of an outlaw motorcycle club? Now you can with this deluxe bathrobe from The Robe Factory. This robe features embroidered club logos.

This website uses cookies to improve your experience while you navigate through the website. Out of these, the cookies that are categorized as necessary are stored on your browser as they are essential for the working of basic functionalities of the website. We also use third-party cookies that help us analyze and understand how you use this website. These cookies will be stored in your browser only with your consent. You also have the option to opt-out of these cookies. But opting out of some of these cookies may affect your browsing experience.
Necessary Always Enabled

Any cookies that may not be particularly necessary for the website to function and is used specifically to collect user personal data via analytics, ads, other embedded contents are termed as non-necessary cookies. It is mandatory to procure user consent prior to running these cookies on your website.